Connecting Cookeville, Algood, and beyond 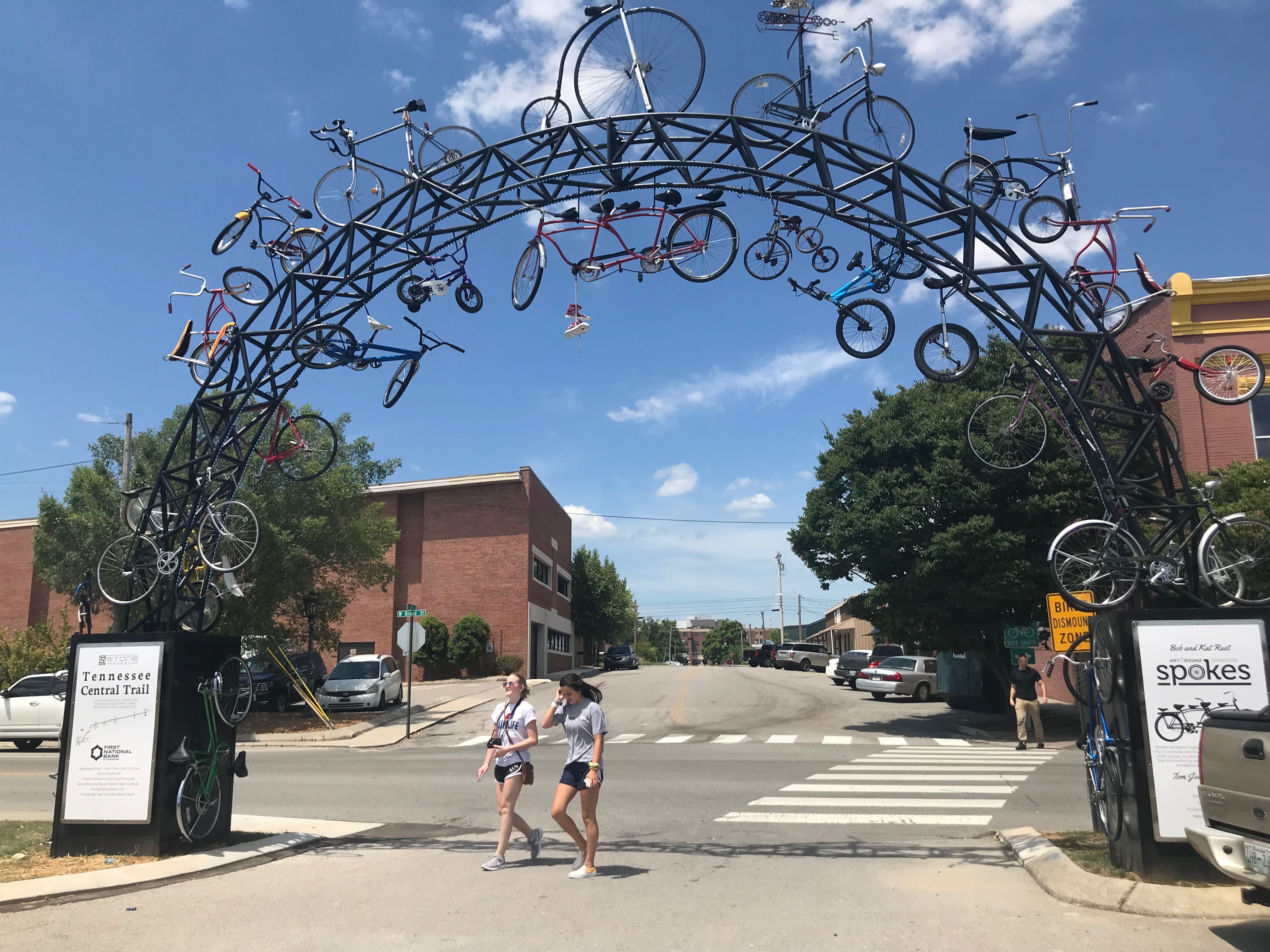 The Tennessee Central Trail is a 4.23-mile, 9 ft. wide paved trail that runs alongside an active rail line and traverses popular neighborhoods in the cities of Cookeville and Algood. A unique rails-with-trail project, it is Putnam County’s first multi-modal trail: a place for active transportation and recreation for residents and visitors alike.

On October 18, 2016, after more than a decade of community organizing and fundraising, the Authority celebrated the grand opening of this first section of the trail.  The fully realized 19 mile trail will form “linear park” connecting the major cities of Putnam County.

The corridor that the trail follows originally belonged to the Nashville and Knoxville Railroad, founded in 1884, which later became Tennessee Central Railroad. The trains primarily carried coal, as well as other natural resources and manufactured goods. It had a long run, lasting until 1968 before finally going out of business. But the tracks did not stay dormant permanently.

Nearly 20 years later, a few trains a week began to roll down the corridor once again under a new banner, the Nashville and Eastern Railroad, serving a large sand mining operation and other industries between Nashville and Monterey. A few times a year, vintage 1950s-era trains also whisk tourists from Nashville to Cookeville and other communities along the way to enjoy farmers markets, antique shops, handmade crafts, friendly restaurants, and all the warmth and charm of small Southern towns. The themed rides, organized by the Tennessee Central Railway Museum, include fall foliage sightseeing, journeys with Santa, and Thomas the Train trips.

In December 2018, the RJ Corman Railroad Company purchased the Nashville and Eastern Railroad Corporation and vowed to remain supportive of the Trail.

As a nod to its railroad history, the completed 19-mile rail-trail will be bookended with two historical depots and, midway, the city of Algood hopes to add a third once its section of trail is complete. As the trail is built toward Baxter, Tennessee, there will be yet a 4th train depot facility for trail users to enjoy. On the trail’s western end, the Cookeville Depot, built in 1909, is a beautiful red brick building with an unusual and elegant pagoda-style roof. It serves as a museum and is also an anchor in Cookeville’s re-energized downtown, surrounded by boutique shops and an eclectic mix of restaurants. The depot in Monterey, on the east end of the trail, is a replica thoughtfully recreated from an original diagram of the 1903 building.

Guiding the development and management of the Rail Trail is the Tennessee Central Heritage Rail Trail Authority (Authority). The governing bodies of the City of Algood, City of Cookeville, and Putnam County entered into an interlocal agreement to establish the Authority with the purpose of operating the Rail Trail.

The Authority Bylaws define its mission as “to create and manage, within the applicable federal, state,  local, and/or grant requirements, a multi-use trail system through Putnam County and the Upper Cumberland region by thoughtful co-utilization of the Nashville and Eastern Railroad Authority railroad right-of-way and/or adjacent properties, greenways, easements, right of ways, etc. for the purpose of non-motorized transportation, economic development, recreation, improved quality of life, tourism, and historical preservation”.

The Authority’s eight appointed representatives meet at noon on the fourth Monday of the month at the Chamber to manage lease payments to Nashville and Eastern Railroad, insurance coverage, event requests on the trail, maintenance reporting, and fundraising opportunities for future enhancements.  Authority meetings are open to the public and regularly documented by the Herald-Citizen newspaper.

The Authority has the full support of the governments it represents. Its appointed representatives work collaboratively with city, county, and Chamber employees to execute events, conduct studies, fundraise, and maintain the trail. Through their active involvement with the Authority, Cookeville, Algood, Putnam County, Leadership Putnam, and the Chamber of Commerce have invested in the Rail Trail’s success and are confident of its positive impact on the residents of Putnam county.

Contact us for maintenance issues, concerns, volunteer opportunities, donation, or anything else at contact@tennesseecentraltrail.com.